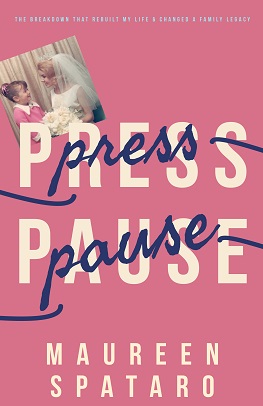 Press Pause: The Breakdown that Rebuilt My Life and Changed a Family Legacy by Maureen Spataro

Maureen Spataro’s smile was the one to light up every room. She was the mom running into the classroom with cupcakes, the friend who you could lean on, the “Team Mom” for her daughter’s softball team. What no one knew, was behind that smile was a past that she stuffed down deep. Until one day, when Maureen wakes up completely numb, feeling nothing at all.

Sexual abuse, physical abuse, suicide, alcoholism, teenage pregnancy…the legacies from both sides of Maureen’s family were quite impressive for all the worst reasons. The legacy she thought was long buried caught up to her, and unmercifully brought Maureen to her knees.

It wasn’t something that just happened out of the blue.  To crash as spectacularly as she did took  years of being worn down.  That day…the moment Maureen’s heart, mind, and soul went numb…was her surrender, her declaration and true belief she no longer had anything of value to offer.

The silly, quick-witted, easygoing woman with the gut-busting laugh was gone. And, there was a sickening, and very real possibility that neither Maureen, nor anyone she loved, would ever see her again.

Press Pause shares the story of Maureen’s breakdown, and the treatment that would have her revisit the traumas from her past, that she thought she had already dealt with. Finally fully unpacking the abuse she endured, the secrets she carried for decades turned into a catalyst for not only healing herself, but changing the whole trajectory of her family’s legacy.

“While reading Maureen Spataro’s book, eyes streaming tears at times, heart cheering her on at others, and feeling every emotion in between, I had to remind myself that this was NOT a movie, nor a fiction novel, this was a beautiful woman who endured such horrific things, and not only rebuilt her life, but has helped others to do the same. I knew her story was not only healing for her to write, but could very well be just what another human being needs to read to know she (or he) is not alone.” ~ Jenn Tuma-Young, Inspired Girl Books

There are no reviews yet.

Be the first to review “Press Pause” Cancel reply

Any cookies that may not be particularly necessary for the website to function and is used specifically to collect user personal data via analytics, ads, other embedded contents are termed as non-necessary cookies. It is mandatory to procure user consent prior to running these cookies on your website.